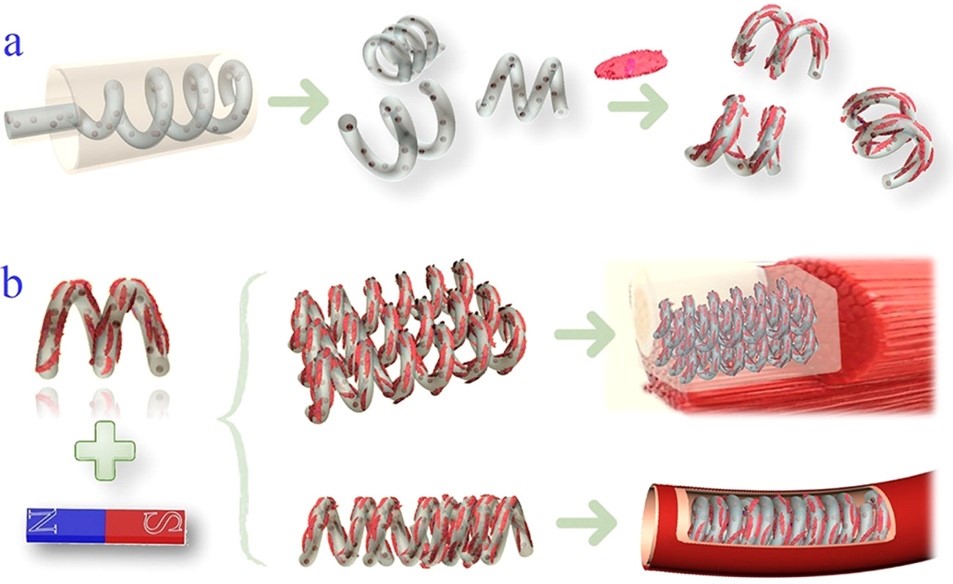 Microcarriers have emerged in a vast number of biomimetic building blocks that were created as cell culture models. Beneﬁting from their large surface-to-volume ratio and good matrix biocompatibility, microcarriers could not only oﬀer a high surface area for cell attachment and cultivation but also provide complex microenvironment conditions that mimic natural in vivo three-dimensional (3D) structures for the transportation of nutrients and metabolites and for cellular interactions as well. Owing to these features, numerous cell microcarriers have been created using electrospray, laser lithography, microﬂuidics, etc. However, to construct complex constructions resembling natural tissues, these microcarriers were usually needed to be manipulated elaborately, controllably, and precisely, which is diﬃcult to realize through simple approaches. Moreover, most of the microcarriers were of simple spherical shapes that impeded their further assembly into speciﬁc tissue structures such as vascular structures. Thus, novel microcarriers with unique structures and functions that can be assembled in a simple and convenient way are still highly expected. However, most of the recently developed micromotors are fabricated from lithography, electrodeposition, glancing angle deposition, laser scanning, template-assisting methods, etc. These methods include steep instrumental demands and relatively high expenses during the fabrication process. Moreover, the resultant micromotors are restricted to certain materials that should be suitable for the fabrication method and are often with small sizes, which makes their use during cell cultivation diﬃcult. These indicate that a relatively simple and low-cost fabrication method for micromotors that could be applied as versatile cell culture blocks and tissue regeneration modules is still deﬁcient.

Recently, Professor Zhao Yuanjin from Southeast University of Biological and Science and Medical Engineering was inspired by the helical rotational and translational motion of bacterial ﬂagella, they presented novel helical micromotors as dynamic cell microcarriers using a microﬂuidic-spin helical microﬁber template. Beneﬁting from the precise control of ﬂuids in microﬂuidic channels and the dicing process, the morphologies of the magnetically helical microﬁber templates as well as helical micromotors could be easily tailored by tuning ﬂow rates and cutting distances. Compared to the existing approaches, this fabrication method could consecutively produce micromotors with desired 3D shapes and material compositions at the microscale in a relatively simple and low-cost manner, which does not need demanding instrumental manipulations or strict experimental environments. Thus, by choosing a typical biocompatible material that is suitable for both helical microﬁber generation and cell cultivation, the resultant helical micromotors are designed as ideal cell microcarriers. Due to the speciﬁc structure and magnetic nanoparticle encapsulation, the helical micromotors could perform paralleling movement and rotated locomotion in response to a corresponding low-strength magnetic ﬁeld. These enable the cell-enriched helical micromotors to migrate, aggregate, and assemble into diﬀerent geometrical constructions including planar arrangements and tubes. The cell-seeding microcarrier stack could be further embedded into a biocompatible hydrogel to form a cell block that is useful for damaged tissue repair, while the tube-structured cell-seeding microcarrier assembly could be used as blood vessel scaﬀolds or vascular models for organ-on-chip study ﬁelds. All of these features prove the developed micromotors to be used as dynamic cell microcarriers, which would broaden their biomedical application scope.